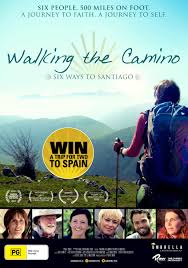 I had been thinking about seeing this one for ages, and kept finding other things to do.  Today though was a day off, so I decided that as it was school holidays it was best to avoid the mall and go to the cinema instead.  The Camino de Santiago is a 800km walk from a small town in  Southern France across the north of Spain arriving in Santiago.  Originally a pilgrim walk done  for the past 1200 years, many now follow the same paths for a variety of reasons.  This documentary follows six different people on their journey.  It was an interesting group of people they follow  and I was surprised with the variety of folks walking along, from the very young (a 3 year old with his mother) to more senior citizens.

It did make me want to pack a little backpack and take a journey along, although the thought of not washing your hair for a month and the big blisters make me sure that I would be whining by the second day.  Might be hard too if you don't fancy sleeping next to snoring smelly strangers - but I guess you get over that pretty soon.  A worthy 4/5.